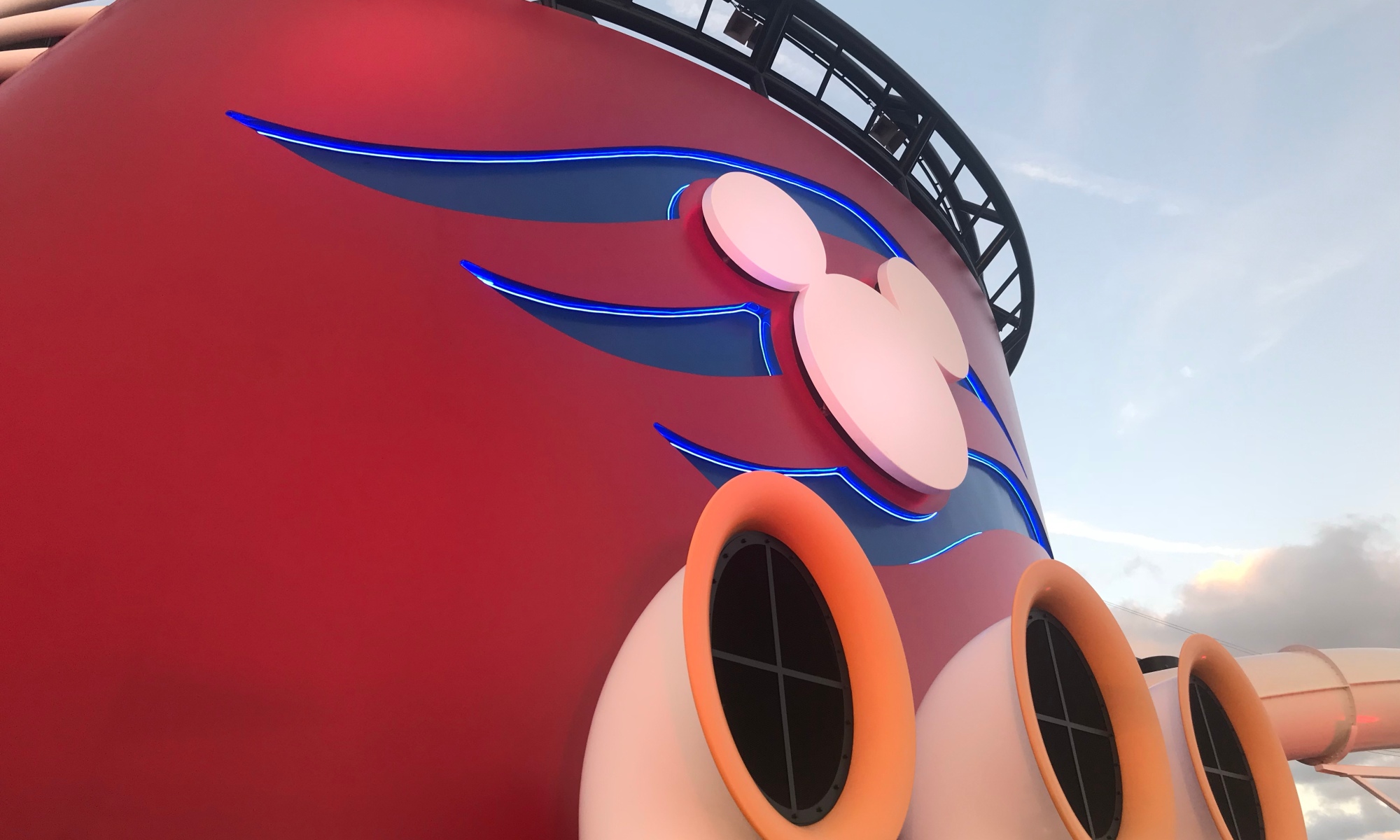 We love cruises.  I get that it’s not some people’s cup of tea, but we just love it.  The ocean breeze, the million food options, the fruity drinks, the ability to visit places for a short time and having fun while getting there.  And most importantly…the people watching.  Cruises are hot beds of amazing people watching.  We are experienced cruisers and have been on several cruises prior to this one.  Norwegian Cruise Line happens to be our cruise line of choice which we can lay out in another blog on another day, but we have also traveled on Carnival and Royal Caribbean.  How did we decide on a Disney Cruise?

Ours was a December cruise so when we left our home in West Virginia it was 18 degrees.  Brrrrr. Needless to say we were excited to get to Orlando to enjoy some warmer weather. Prior to the cruise we stayed at the Four Seasons Resort on the Disney property.   This resort was AMAZING, it was one of the best hotels we have ever stayed (Future blog post on the Four Seasons Orlando is coming!).

As we mentioned, we were invited on this cruise by one of Rebekah’s friends from Medical School.  There were a total of 11 of us going on this trip.  A large cargo van picked us up at the hotel and took us to the cruise terminal in Cape Canaveral. There weren’t too many cruise ships in port at the time we arrived only The Dream and one other ship were in port.  Soon after we arrived the NCL Gem docked next to our ship.

The luggage drop off prior to embarkation was a fairly easy and efficient process, the porters quickly took our bags and we were off to the line to go through security.  This line was pretty long.  Normally it wouldn’t seem too daunting, however we were a group with two pre-schoolers and they can lose it pretty quicky!  Luckily a cruise line employee came up to our group and said, “how would you like to go to a shorter line?”  We followed him to the other side of the building where there was no line!  It was like a teeny little victory for the toddlers J  We proceeded quickly through security and were issued our ship cards. Hip Hip Hooray it was time for us to board.

Cruise ship terminals are different depending upon the cruise line and the location.  Some cruise terminals are boring with no decorations and some are themed to the location or the cruise line.  Disney’s terminal did not disappoint.  The Disney magic was evident everywhere. There is a really cool ship model in the terminal which is super cool to look at because it is open on one side with teeny models of what is inside the ship.  Even cooler is that Mickey is also there and you can get a picture with him. As you head to board the ship you walk through a Mickey shaped arch way.

One last piece of Disney magic has been added to the boarding process. As you board the ship, a cruise representative will make an announcement welcoming your family aboard the ship.  “Welcome the Guillow Family!” A large contingent of the ship staff will then clap as they announce your name.  This is a fun touch that the kids and adults in our group loved!

Once we made it on the ship we were hungry, so we headed up to Cabanas Buffet for lunch.  The experience at Cabanas was similar to most other cruises on the first day.  The buffet was crowded and CRAZY.  The food was typical cruise buffet food, with a large selection to please everyone.  We spend a large amount of time researching our upcoming vacations via reviews online, so we had read a bunch about DCL. Some reviews stated that they thought the food at Cabanas was a higher quality compared to other cruise lines.  We did not agree with this.  I thought the buffet food was fine but the selection of food was somewhat smaller relative to other cruise lines.

Neither of us liked the set -up of the buffet. It is in a horseshoe shape with the same food on both sides.  It was similar to the Carnival Breeze and can allow for longer wait times and lots of congestion.  We prefer spaced out stations like on NCL Jewel class ships, this allows for much less congestion.  There are two main doors in and out of the buffet, however there was door that always locked.  This caused backups both ways going in and out of the buffet.  Lastly, the buffet hours felt limited relative to other cruise lines. This was frustrating when trying to get an afternoon or evening snack.  There is an outdoor grill area by the pool with pizza, hot dogs, etc but it is not always open either (12-3:30 and 4:30-6).

After a fun but chaotic embarkation lunch we headed to check out our cabin: a family veranda room.  The room was a very large for a cruise ship room, there was more than enough room for the 3 of us.  As you entered the room the bathrooms are both right by the door.  The main bed is soon after the bathrooms with a living space/nighttime beds.  After that is the balcony door.

Like most family travelers we loved the bathroom set-up! DCL splits the bathroom into two parts.  One has a toilet and sink while the other has a shower/tub and sink.  The split orientation is super helpful because if you have a family then someone can be toileting privately while another person can be showering/bathing privately.  The bathtub is a rarity on other cruiselines and is standard on DCL.  A huge bonus for people needing to give a toddler a bath.

We used a pack-n-play for our daughter and there was plenty of room to place it in the “living space” portion of the room. If you travel with older kids the couch pulls out into a bed and there is also a Pullman bed in the ceiling.

Rebekah’s other favorite part of the room is the large curtain that can be used to separate the living/kids space from the main bed.  It was a large and heavy curtain so it felt like a nice divider.  This was especially helpful for things like early bedtime. The lighting is separate on both sides of the curtain so it can be dark on one side and light on the other.  Also, the TV swings around so it can be on and seen in either the kids side or the main bed side.  This was another nicety for early bedtime.  We felt like we could watch TV after Rosie went to bed and the light from the TV wasn’t bothering her.  With her noisemaker going at night it wasn’t quite like having her own room, but almost.

By the time we go to the room, it was time for Roseanne to take a nap, so Ben stayed back with her while Rebekah explored the ship with her friends and ended up winning a $75.00 spa credit!   After unpacking and a quick nap by Roseanne, it was time for muster drill. The cruise is about to get underway!

After muster drill it was time for dinner.  Disney uses what could be described as traditional cruise dining times.  Families are assigned a time, whether early or late.  DCL does assign a specific wait staff to your group but you do not stay in the same restaurant nightly.  You get to rotate restaurants each night.  You and your wait staff will rotate through Animator’s Palate, Royal Table, and Enchanted Garden.  Keeping the same waiter is super helpful because they learn your preferences and yours and your children’s names.  It is wonderful.  We started our dinner rotation at Animator’s Palate.  We were introduced to our waiter, Kevin, and our assistant waiter, Yulia, as soon as we sat down.  They were great with our crew which consisted of 6 adults and 5 children.

Full disclosure, we are not generally fans of Main Dining Rooms (MDR) cruises.  We tend to frequent specialty restaurants while cruising and we usually prefer any time dining. However, Animator’s Palate was different much better than the typical MDR, the food at Animator’s Palate was excellent!  Rebekah and I both agreed this was the best MDR food we have had on a cruise. I cannot say enough good things about the food and service during this dinner.  Our server was so amazing.  He was so funny, did magic tricks, and was not flustered at all by our crazy kids J

Our table was not located next to a wall, but if you were lucky enough to be seated in certain tables along the wall, Crush the turtle will come over and talk to you and your family.  It’s a cool animated feature and must be really awesome for those families who get to sit there.

The assigned dining times are scheduled to coordinate with a nightly entertainment.  The show on the first night was titled, “The Golden Mickeys”. It was an awards type show that featured many classic songs from Disney movies. Unsurprisingly, it had all the Disney magic and the performance was really good.  The theater was nice with ample seating on the on the 3rd and 4th floor.  One of Ben’s favorite things about the show was the concession areas right before you come into the theater.  You can purchase popcorn, candy, beer, wine, bottled water, etc.

After the show we headed to bed so we could be up and at em early the next day in Nassau! Stay tuned for Day 2!

5 Replies to “Cruising with Mickey! (our first Disney Cruise on the Disney Dream)”